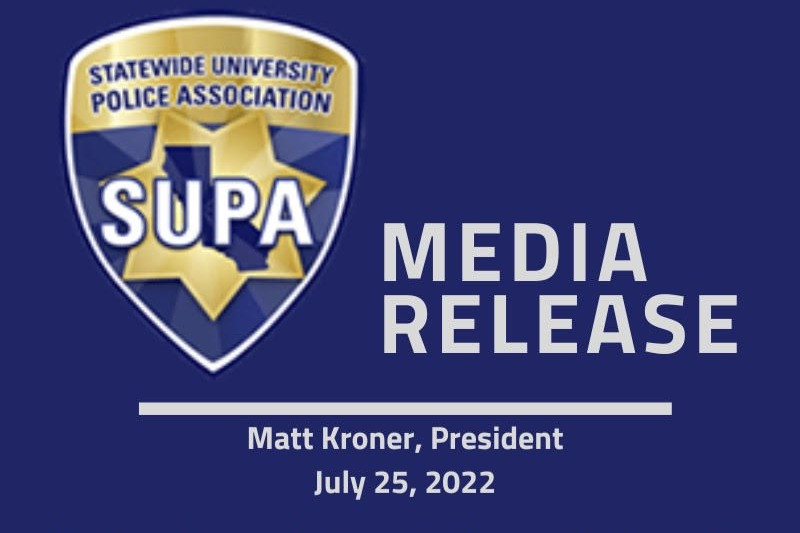 Long Beach, July 25, 2022 - Matt Kroner, President of the Statewide University Police Association (SUPA), issued the following statement regarding a knowingly false complaint of racial bias against a member of the SUPA employed at the Long Beach State Police Department:

The statements made to the media by the California Faculty [email protected] Beach (CFA) alleging racial profiling and discrimination by a California State University Long Beach police officer and the statements made before the CSU board of trustees are demonstrably false.

It is regrettable and a discredit to both the CFA Long Beach chapter and Dr. Steven Osuna, an associate professor at the University’s Sociology Department, would make knowingly false statements after having an opportunity to review the video that conclusively demonstrates what occurred. The officer’s body camera video proves Dr. Osuna and CFA’s description that racial bias prompted the officer’s actions are entirely fabricated. The officer involved is Asian, and the Latino supervisor who wasn’t on the scene and made the final call on how the officer on the scene handled the incident had no way to know Osuna’s race.

The facts are undisputed. Dr. Steven Osuna told the responding police officers that he had lost his wallet that contained his identification and had no other photo identification on his person. In accordance with the University policy, the door would not be opened for him because he could not identify himself. The officer informed Dr. Osuna that he wouldn’t be able to assist him and apologized to him.

The responding police officer and his supervisor strictly followed Cal State University policy regarding unlocking a door for persons who cannot produce any identification. This policy is well-known and even admitted to by the CFA statement, which calls for a change of that policy.

Allegations of racial bias by Dr. Osuna are beneath his profession and constitute dishonesty and discourteous treatment of other CSU employees. SUPA demands a formal investigation of our complaint of misconduct by Dr. Osuna and expects the CSU Board of Trustees to take appropriate actions against Dr. Osuna and any other entities that falsely accuse others of racial bias.

An unedited version of the incident, obtained under the Public Records Act, can be found here: https://www.youtube.com/watch?v=bvzh8fogFxU

A copy of the SUPA letter addressed to the Board of Trustees that details the knowingly false allegations can be found here: https://www.ekapr.com/download/2168/

A copy of the CFA letter containing false and stigmatizing complaints of racial bias can be found here: https://www.ekapr.com/download/2171

A copy of the policy regarding door unlocks can be found here: https://www.csulb.edu/sites/default/files/document/go_10_-_community_assistance_calls1.pdf

NEP IS A UNION WORKPLACE!
PROUD MEMBER OF CWA L-9003